A History of Light in Art

Light is the basis of human sight. Light reflects off of objects and enters the eye where it is channelled to the retina and perceived as colours and shapes. Art has played with these perceptions over time, challenging viewers with what they see and understand from each piece.

Painting has a long tradition of playing with light, as both a subject and a tool, to create certain effects and elicit emotion. Indeed, every brush stroke is applied with the source of light in mind. The light determines the colours, the shading and creates forms. Not just limited to abstract art or realism, it is essential to every painting style.

This article will use a thematic approach to consider some of the ways in which artists have manipulated light over time. We will look at the historical differences in the use of light but also the personal differences, which go beyond the painting fashions of the time and come to define individual artists. 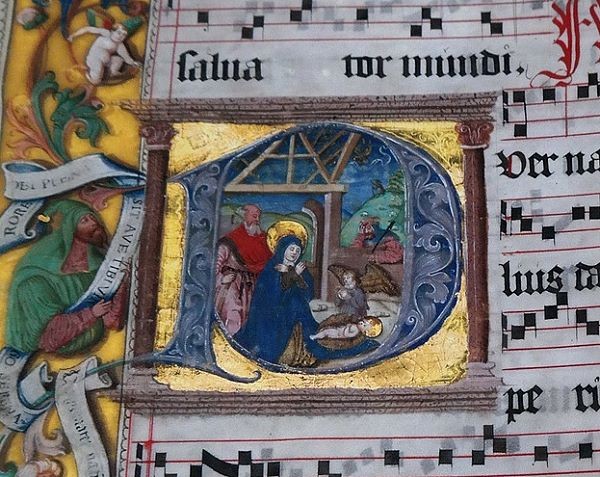 One of the beauties of light as a tool in painting is the way it can be used to build up symbolism. By ‘shining a light’ on certain elements in a painting, such as a hand or a flower, a story is constructed.

In Christianity, shimmering gold paint and gold leaf was a popular method for highlighting holy symbols. Often halos were made of gold so that the holiest figures stood out among the other earthly bodies. This heightened the contrast to the faces that were left in shadow, signifying darkness and sometimes betrayal. By layering different light effects, early artists were able to create works that were thick with symbolic meaning.

It is also thought that the use of gold in intricate holy manuscripts was to create an effect when the page was turned. Often, the gold features would be raised from the page. When the parchment was moved, the gold would reflect the light from the reader’s environment and catch the eye, helping to create a sense of awe and devotion. This technique was especially used to highlight names, symbolising their saintliness.

During the Middle Ages, light itself was used as a metaphor for divine light. Religious art at this time played with light to produce different symbolic effects. This is most clear in the intricate examples of stained glass that still exist today but the concept was exhibited through a wide range of mediums. 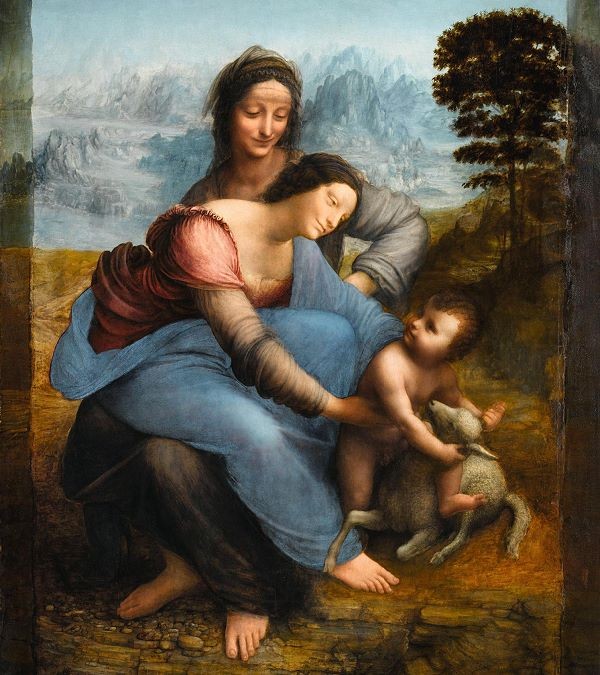 Light is essential when artists wish to build a sense of perspective. Light and shadow lend a painting depth and without this, work can feel incomplete. Worse still, it can leave the viewer confused.

Leonardo Da Vinci was one of the first people to scientifically study the properties of light during the Renaissance. He particularly deliberated on how it affects human perception. He observed and recorded the effect of different light levels on objects and the effect that distance has on how light and shadow is perceived in landscapes. In his art, he used his findings to create perspective and space. He constructed an acute sense of positioning and depth based on light.

‘Sfumato’ is a particular technique that has been attributed to Da Vinci and features in some of his most famous works. The word roughly translates to ‘to evaporate like smoke’ and was an effect that involved smudging the borders between objects to create a feeling of focus and lack of focus. The technique also allowed the artist to give his work more atmosphere.

The Renaissance was a time in art history when a great deal of experimentation was taking place in art in reaction to the advancements in the sciences. Whilst Da Vinci is one of the most renowned, many more artists were also playing with light and perspective in similar ways.

Beyond just rendering things visible, light has an interesting ability to provoke certain emotions in humans. Turn your mind to a bright summers day or a gloomy winter sky. How do you feel on those days? How does your mood differ depending on the weather? You can also consider how you manipulate the light in your own home. What changes do you make to the lights to create a feeling of warmth and cosiness? What about to help with concentration and productivity?

Light levels can directly influence our mood and the sense of atmosphere in a space. It can also alter how we respond to certain environments and even people. Light goes beyond just being functional, it is also deeply affecting.

In 2-D painting, the use of light can be no less emotional. Its role in highlighting certain elements of the composition allows it to tell a story, the work becomes a performance in one image. When combined with diagonal lines, the drama is heightened even further.

Caravaggio (1571 – 1610) was one of the most famous artists to use light in an extreme way. He is known for including one light source in his paintings and playing with the way that it creates light and shadows on his subjects. In doing so, he focuses in on the on the human form. He uses light to create a sense of volume and mass, to give the characters in his work a solid and often unsettling presence. Similarly, he is an expert at drawing out the emotion that the light creates. 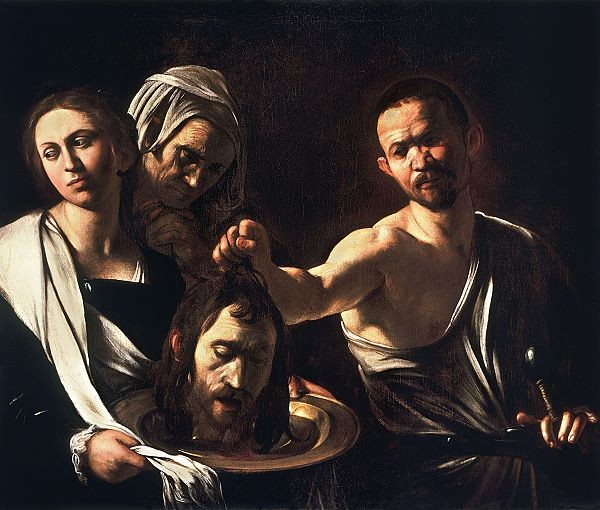 This practice of using intense contrasts in light and dark is known as ‘chiaroscuro’. It was particularly popular during the Baroque period, following the Renaissance, when many artists experimented with the technique and its ability to give pieces a distinct sense of theatre. It is an extremely effective way to elicit emotion and can bring wonder, anticipation, eeriness, and fear to an otherwise ordinary composition. 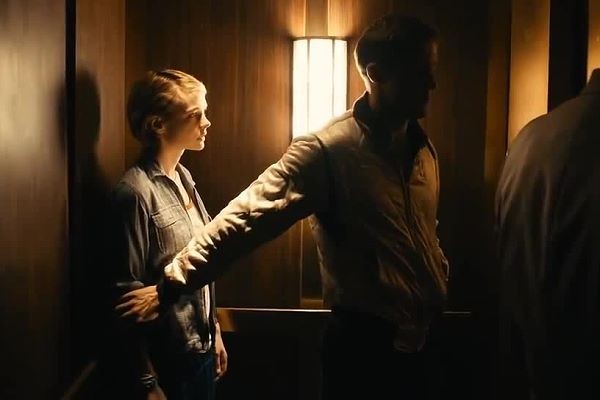 The technique of using light to create emotion is also heavily used in modern film. Directors employ different light effects to signify changes in the action and to further character development. The 2011 film ‘Drive’, directed by Nicolas Winding Refn, features a scene in an elevator in which the central character transforms into a violent killer in front of the woman he loves. There is no dialogue in this scene; the emotion is produced entirely through the use of light. Note the similarities between the screenshot below and the Caravaggio painting above.

Light as a Subject 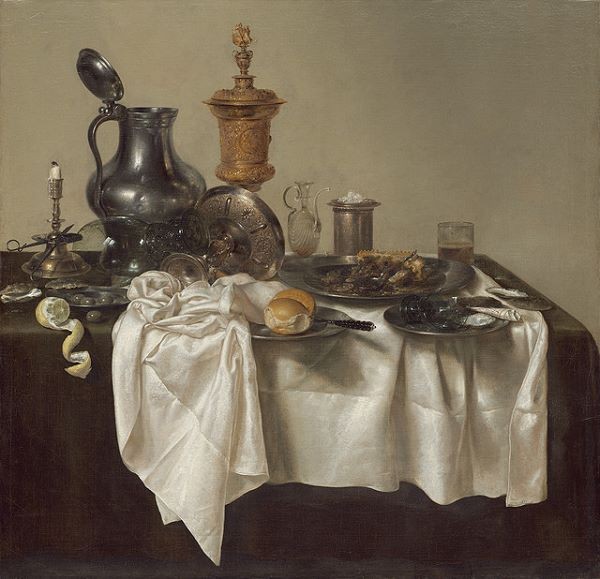 The first painting tradition that began to use light as a subject in its own right was during the 17th century, the Age of Enlightenment. At this time, new scientific explorations into colours and light changed the way that artists used light in their art. Artist like Johannes Vermeer began to give light a key role in their paintings. In many works of this time, the light speaks.

Willem Claesz Heda is an interesting example of this. In the still life works he is famous for, the light endows the objects with form and purpose. The eye is almost completely led by the direction of the light and the objects it touches. In the painting above, the candle in the scene has been blown out. The only light source is natural light, as though from a window. The shining white tablecloth and the jug reflect this light back at the viewer, toying with us and demanding attention.

For the Impressionists in the 19th century, light took on a different but similarly central role. This was the period in which many painters went outdoors and into nature to find inspiration. As a result, we see a rise in diffuse light sources that mimic natural light. Painters begin to focus more on the way in which sunlight affects a scene or a landscape. 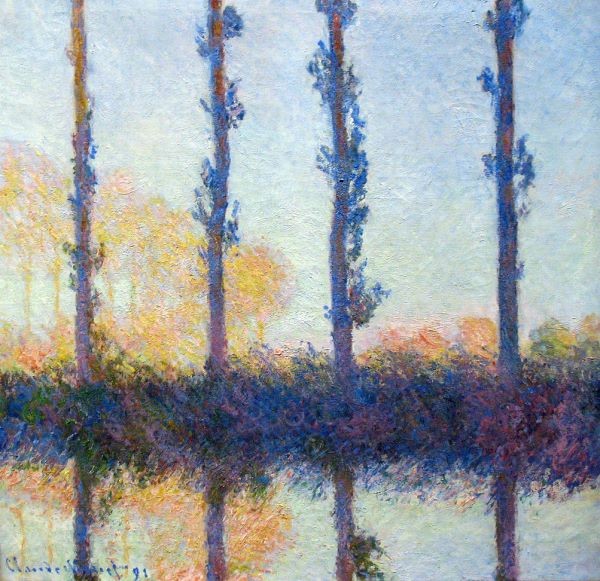 Claude Monet is perhaps the best-known Impressionist in his use of light and colour. In many of his works, he uses water to make light a key feature in his paintings. He explores reflections in the water, showing shapes to the viewer through their reflected image. This creates a dreamlike effect, where things only become clear when they are studied through their relationship to the light. In doing so, Monet softens the distinction between what is real and what is imagined, using pleasing colours to lull the viewer into his world.

Even in his more realist work, Monet always pays attention to the behaviour of the light. He employs careful colour gradients to echo how sunlight plays on a building, for instance. This mastering of subtlety is what makes his work so mesmerising. 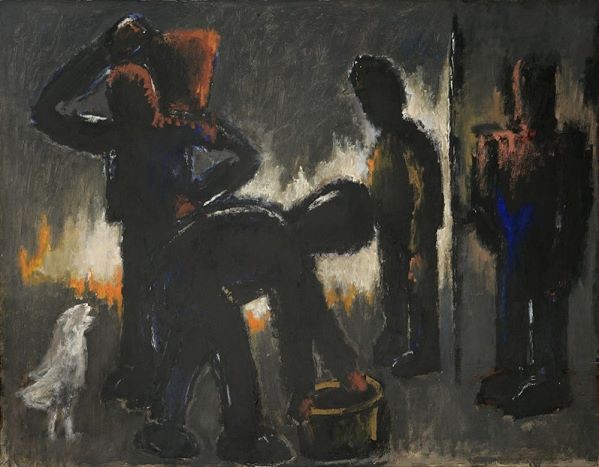 We have already discussed shadow in relation to symbolism and creating drama but it is also important to note the use of darkness as a tool in its own right. This is particularly evident in monochrome paintings where colour is not present as a tool to create form. In these instances, different shades of grey and black produce the shapes and composition of the work.

Josef Herman used dark palettes heavily to depict evening and nighttime scenes, defining his subjects almost entirely through shadow. In his work, the absence of light is what stands out the most. His paintings indulge in large spaces of blackness; these areas that are as important and as absorbing to the viewer as the areas of light.

In the artwork above, the shadows define the figures. The only light behaves like moonlight, just vaguely illuminating some details.

The monochrome style is often used to create patterns, utilising the contrast between light and dark to produce optical illusions. This painting style was particularly popularised during the 1960s in which Op Art used geometric forms to play with the viewers’ perception.

The way that a piece is lit after it has been completed can have a surprising effect on how it is perceived. Lighting has the power to obscure or illuminate. This has influenced the style, and indeed the use of materials, of art throughout history as artists responded to new innovations in lighting.

Consider the stunning painted caves in Europe, with some dates putting them at 36,600 years old. These paintings go back to the beginning of human artistic expression but they would only have been visible with the use of fire, most likely a lit torch that would flicker and smoke as the viewer held it up to see the hidden art. 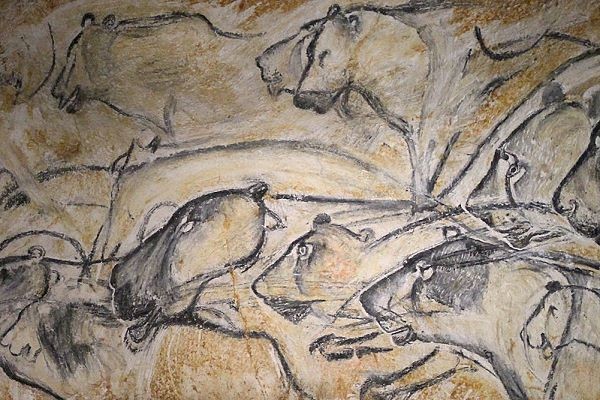 This is one of the earliest examples we have of human painting but the importance of lighting a completed work has endured. During the Renaissance, we see the rise in the use of golden painted frames. These not only had the effect of making the work seem rich and regal but also made the paintings a focal point. The eye is drawn to the reflection of light on the frame and then to the painting within.

With textured and mixed media pieces, the way a painting is lit can reveal the hidden patterns and depth that would otherwise be invisible. New shadows are created that shift and appear as the light changes. It is particularly effective if viewers are able to walk around the piece to view it from different angles. Often, these paintings are granted the effect and drama of two light sources: one within the painting and the other from outside.

This article has explored the historic use of light in painting. However, in the 20th and 21st century, with the proliferation of electric light, there was a rise in the number of artists using light to create art in its own right. These changing styles can act as a source of inspiration for our own work.

Light is the way in which artists can develop their identity and originality. It is the essence of every painting. The history of innovation and experimentation in art has allowed those of us living today to see the light. 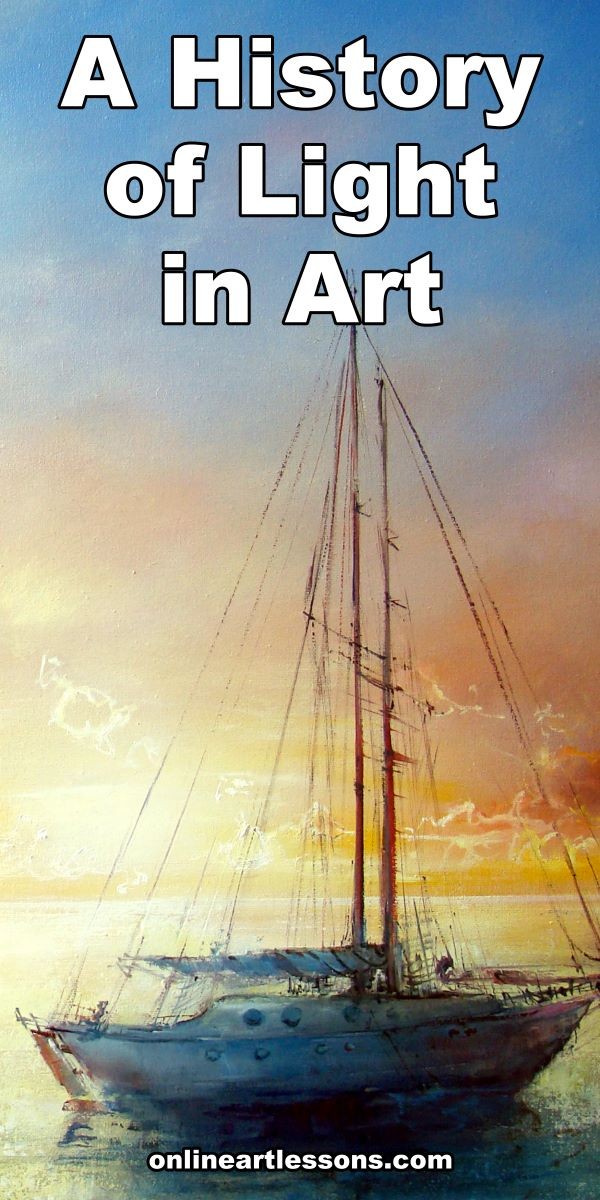